Gina and her Friends Turn 200

For 22 years, more than 5000 pages, and now 200 issues, Gold Digger has been written, drawn, colored, and lettered by one person: Fred Perry. Now Antarctic Press is celebrating the 200th issue of Gold Digger with the Gold Digger 200 Series Special. “Gina heads off on a dangerous expedition to a lost Mayan temple on Monster Island, and this one time, everyone’s available to come help out. For the first time, Gina embarks on an expedition with an army of experts to assist, and she’s going to need every one of them to help with what she faces!” Among the extras included in this issue is the location of a special web site where the previous 199 issues are available for free. Watch an interview with Fred Perry on YouTube discussing the issue, or you can pre-order it at Things From Another World. Everyone else can look for the issue in late April. 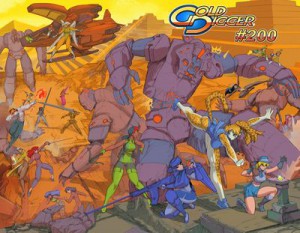 The show is to contain this year's best clips plus new material, and can be seen via direct stream or JustinTV. Watchers can discuss the show in real time on #FursuitTV (Anthrochat).