Thabo Meerkat and Dixie Lioness have released their Charity Index finding that furries raised more the $500,000 for Charity in 2020. This is in spite of the challenges caused by the pandemic. It should be noted that information was more difficult to obtain this year, and the numbers for Virtual Midwest Furfest are not included in this tally.

Earlier this year, tragedy struck the furry community, when a couple was struck by a drunk driver while they were walking their dogs. All four dogs were killed, and the boyfriend – Harison Long-Randall (Elden) – later succumbed to his injuries as well, after selflessly and heroically pushing his girlfriend Gemily West (Wolfgem) away from the recklessly speeding vehicle, and taking the brunt of the impact himself.

The sheer horror of the tragedy and outrage at this hit-and-run spread through the furry community like wildfire. But nothing we do can replace the loss Gemily must feel. So we do what little we can: and that little is to hold a fundraiser to help Gemily financially with any outstanding medical or other expenses during her time of loss.

Furry End of the World will be holding a special collection at the convention and will donate 100% of the proceeds from the art auction to Wolfgem. Furry EotWC is currently accepting donations of original art works, commission gift certificates, fursuits or pieces, and other items of interest to the furry community to auction at the convention. One of our own greatly really needs our help.

SportyPup, a fur from Macon, Georgia, needs surgery due to a bad valve in his heart. This condition is called Valvular Heart Disease, and if not treated will cause heart failure. The surgery will cost $40,000, but he needs $16,500 up front, just to be able to have it.

The longer Sporty has to wait for the surgery, the greater the risk is of heart failure. The hope is to have enough to be able to have the surgery later this month in Asheville, North Carolina, but only if the doctor sees that the amount needed will come in quickly after.

Sporty will be 31 in March. Besides being a furry and occasional fursuiter, he is also a father of a 3 1/2-year-old boy named Koda.

Four furs' belongings lie in ruins today after a fire in Millvale, Pennsylvania.

The fire started early yesterday morning, possibly due to a faulty meter, and quickly spread through a common wall to the rented house of Thrashbear, Firefox, Fire Lupine and Landis.

The four-alarm blaze took two hours to quench. No injuries were reported, but the first house was gutted, and the second was badly damaged by smoke and fire suppression.

The Red Cross is assisting the occupants, and the furs have offers of temporary housing. Dobie is taking donations on the furs' behalf. 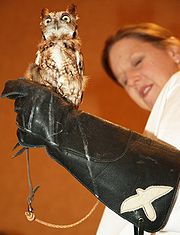 November saw another success for furry fundraising events, as the Funday PawPet Show surpassed it's target of $10,000 in just two of their 4-hour broadcasts, thrashing last year's total of $3,940.19 in less than half the time.

Over 120 people are documented as donating to the show, many already regular viewers and visitors to the shows IRC channel.

T.H. Squirrel was celebrated as the largest donor, paying $1,400 for a Herbie Bearclaw commission. Many fursuiters also donated their services, and one fursuit maker raised an extra $350.

I have to say that nobody on the cast truly expected the level of support that we got tonight.

The donations are set to go to licensing fees, operating expenses and hardware upgrades.

The fandom's most popular furry fanzine, ANTHRO, has been saved from imminent bankruptcy last October by none other than it's loyal readers.

ANTHRO editor Quentin Long was at risk of immediate eviction from his home and indeed the headquarters of the internet fanzine; however the community came to the rescue, raising over $500 in just a few days.