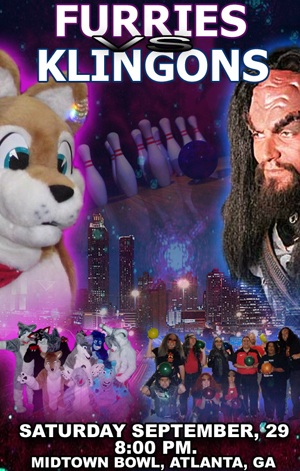 The event was widely publicised

It was the battle of the fandoms on September 29th, 2007 when Atlanta furries took on a challenge by local Trekkies in Furries vs. Klingons, a bowling competition held in Atlanta, Georgia between a group of furries and two local Star Trek fan clubs.

The event was organized by the USS Republic NCC-1371 (the Atlanta chapter of STARFLEET International) and the Atlanta MurrFurs. The Atlanta chapter of the Klingon Assault Group, a.k.a. KAG Atlanta, was also invited to compete. "Lucky Wolf," a member of the MurrFurs, created the poster image that billed the event, somewhat misleadingly, as "Furries vs. Klingons," despite the fact that it was actually a STARFLEET event.[1][2].

The Klingon team - most of whom appeared to be humans in regular Star Trek uniforms - emerged victorious, with a score of 32 to 27.[3] However, the furry team had far more members than the Klingons.

The event was first announced on the Atlanta Furs community LiveJournal,[4] and the news spread from there. It hit not only furry websites, but also popular websites Boing Boing and Fark, and was attended by G4.[5] An online poll of supporters attracted over 500 votes, which were evenly distributed between the teams.[6]

The furries were at a disadvantage as fursuits made bowling difficult; specifically, the paw gloves made holding the ball tricky and the costume head obstructed vision. However, not all furries - or Klingons - were in costume.

Due to uneven numbers, the winners were decided in a bowl-off between the top five bowlers from each side.

Video of the event. Source: James B. Clark