Greetings! M'aiq knows many things. What is your interest? You seek knowledge. M'Aiq has much. Some of it verified by actual facts! 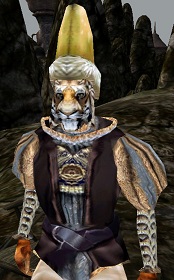 M'aiq the Liar: Dragons? Oh, they're everywhere! You must fly very high to see most of them, though. The ones nearer the ground are very hard to see, being invisible.

dronon: MGM may be planning to adapt The Rats of NIMH into a Smurfs-style live-action/CGI hybrid franchise.

M'aiq the Liar: There is no mystery. M'Aiq knows all. The dwarves were here, and now they are not! They were very short folks... Or perhaps they were not. It all depends on your perspective. I'm sure they thought they were about the right height.

M'aiq the Liar: Ahh... The beauty of the naked form. Of course, there is an island you can reach filled with wonderful, naked, glistening bodies. It only appears when the moons are full, the rain falls, the seas run red and it's M'Aiq's birthday.

crossaffliction: If you appear in a list with Squirrel Girl, you’ve made the big leagues.

M'aiq the Liar: M'Aiq has heard of this. They've got all the money. Mudcrabs taking over everything. They already run Pelagiad.

crossaffliction: “I'm not kidding. This movie was co-written and co-directed by lions and tigers.” M'aiq the Liar: M'aiq longs for a Colovian Fur Helm. Practical, yet stylish. M'aiq is very sad he does not have one.

M'aiq the Liar: M'aiq wishes he had a stick made out of fishies to give to you. Sadly, he does not.

crossaffliction: The animated Oscar list has been updated through 2014.

M'aiq the Liar: M'aiq believes the children are our future. But he doesn't want them ruining all of our fun.

M'aiq the Liar: Feet are for walking. Hands are for hitting. Or shaking. Or waving. Sometimes for clapping.

Fred: The woman trying to save all Italy's pigs.

M'aiq the Liar: M'aiq prefers to adventure alone. Others just get in the way. And they talk, talk, talk.

Fred: How chameleons change their color.

M'aiq the Liar: People always enjoy a good fable. M'aiq has yet to find one, though. Perhaps one day.

Fred: Crows that give humans gifts.

Fred: BBC to remake Watership Down as CGI feature.

M'aiq the Liar: I have seen dragons. Perhaps you will see a dragon. I won't say where I saw one. Perhaps I did not.

M'aiq the Liar: Werewolves? Where? Wolves? Men that are wolves? Many wolves. Everywhere. Many men. That is enough for M'aiq. M'aiq the Liar: Snow falls. Why worry where it goes. M'aiq thinks the snowflakes are pretty.

M'aiq the Liar: M'aiq is always in search of calipers, yet finds none. Where could they have gone?

earthfurst: @sofawolfpress #crowdfunding to colorize and print book of @radiocomixinc's #furry Anubis #comics, ends on April 5. Furstarter has a nice piece about this Anubis crowd-funding.

M'aiq the Liar: Something strange happens to Khajiit when they arrive in Skyrim.

M'aiq the Liar: Werebears? Where? Bears? Men that are bears?

M'aiq the Liar: Dragons were never gone. They were just invisible, and very very quiet.

dronon: It's a hoax, but damn, I would've watched a cartoon like Super Turbo Atomic Mega Rabbit.

Patch Packrat: Q&A with IMVU about buying FurAffinity (not the one at their own site), informed by some chat with Greenreaper.

M'aiq the Liar: It does not matter to M'aiq how strong or smart one is. It only matters what one can do.

crossaffliction: TMNT 2 and/or 6 to begin filming, appropriately, some time next month.

M'aiq the Liar: M'aiq speaks the truth, except for when he doesn't. With you, always the truth.

crossaffliction: MLP:FIM will have a season 6, and it may be here by the end of the year.

Greetings! M'aiq knows many things. What is your interest? You seek knowledge. M'aiq has much. Some of it verified by actual facts!