Review: 'The Autumnlands: Tooth and Claw' 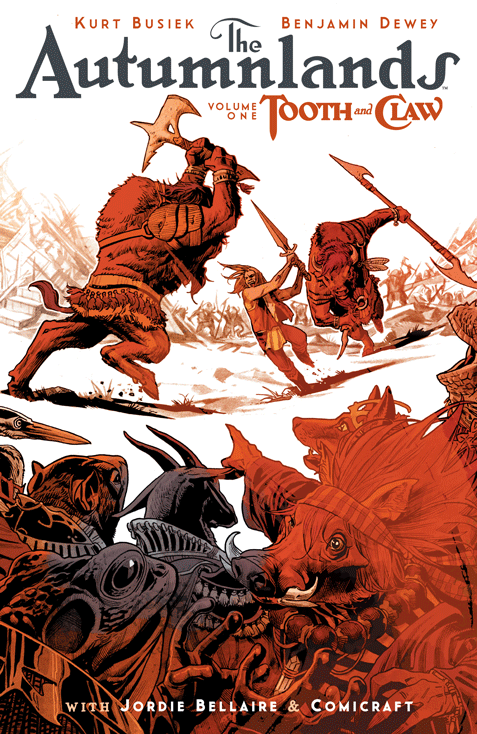 The Autumnlands is the creative result of writer Kurt Busiek and artist Benjamin Dewey, with help from colourist Jordie Bellaire and typesetter John Roshell and published by Image. Started in 2014, it is still in continuation with a recent release of a second volume.

The story revolves around the city of Keniel, one of seventeen great floating cities above the earth, resides a relatively peaceful community of anthropomorphic people living in a world of sorcery. In the eyes of Dunstan, a young bull terrier lad, life is going fairly well as he learns from his father to take on the family trade business.

Though not all is well as it seems in the world. Magic fades at an alarming rate and the great mages seek to desperately restore it. In relative secret a group of mages seek to bring back a great hero of legend to restore the world’s magic, despite the warnings of their council superiors.

Unfortunately for them, things don't play out as planned.

It’s a phenomenal story collecting the first six issues of the action/fantasy series featuring primarily anthropomorphic animal characters. While these topics of talking animals and magic seem like the things a child would like to read about, it’s noted that this comic touches into more mature territory pretty quick.

In this series you will find nudity, racial segregation and stereotyping, violent impalement and disembowelment. And this is just within the very first chapter!

It immediately sets itself up as being a story for mature readers, and a clear reminder that some comic books aren’t written for children.

The colours in The Autumnlands are astounding. Each page displays a vibrant palette of hues, often in themes. Some pages are primarily earthtones, while others are exclusively green, orange, red, or even the entire spectrum on a page. It’s lovely to see an artist making use of colour in such a way to convey either emotions of brooding, suspense, or excitement. Bellaire has done well in his work as colourist for this comic.

The artistic style is something to be noted, especially in regards to characters facial features. Dewey’s choice to use realistic animal features adds to the aesthetic of the book, which includes features like a dog’s panting muzzle and expressive ears. The sense of anatomy is impeccable, especially with the varying body features like the anthropomorphic bison, birds, and snakes. Everything just seems right with the characters.

It’s attention to details that makes this comic. As the volume is a collection of individual issues in a series, each chapter holds a significant challenge and climax for the characters in order to keep people reading from issue to issue. Each chapter leads off the previous one, with interludes of story elements separating each chapter.

That being said, the action hits readers repeatedly in order to keep attention. It can tire out readers fairly quick. It can potentially overwhelm readers with new information, making them forget some small details about some interactions characters have.

Otherwise, the story does leave some questions left unanswered

The characters, as of volume one at least, show only the beginning signs of development, or already have fleshed out characters with their own needs and ambitions.

One character that stands out is Dunstan, a bull terrier lad presumably in his early/mid-teens. Through the events of volume one, he’s still learning to do things on his own. He’s depicted as being very attached to his father and eager to take on the family trade business, though he does have some reluctance in dealing with intimidating customers. In the first volume, he’s still coming into his own, and his actions remind the readers that he is still a puppy in a way, especially how another character, Learoyd, treats him. It’s adorable in a way and it’s easy to grow attached to young Dusty as he starts the greatest chapter in his life. He’s made out as something of a reluctant protagonist in the story. Though Dusty plays more of an assisting role to the “Great Champion,” he’s not as noted among his peers as others, including the likes of wizardess Gharta and Councillor Sandorst, two figures that seem to be at odds through the entire comic as they loosely work together to reach a common goal; to summon the Great Champion and to survive.

Gharta is worthy of note, as she’s the one that brings up the issue of dwindling magic and provides a solution to bring it back. She’s presented as a short warthog that is unsatisfied with complacency, and is assisted by her companion, Affa, a tall giraffe that acts as her voice of reason. Gharta is very much a seer-type character that wishes to bring a greater good to the world by any means necessary.

Her opposite is the more ambition-driven Sandorst, a Great Horned Owl that is only really concerned with making himself look good. He’s not above making power-plays in order to gain control of the group, making ill-advised backroom deals with shady coyotes, or straight up sacrificing his own to “save the day.” He certainly makes himself out as an antagonist in a way, though he does only what his nature compels him to do. He’s not so malicious as he is being a natural asshole.

Though there are more characters that are most certainly working against the hero and the people of Keniel.

A particular example would be the vengeful Seven-Scars, the hulking American Bison. This is where the themes of racial segregation come into play, but it also acts as a play on history. He and his tribe of buff buffalo live in squalor on the earth, below the floating city of Keniel. The word to best describe his brute is “angry,” especially as he is cheated in trade with the cloud-dwellers and treated as a lower lifeform.

Though the people of Keniel think of the earth-dwellers as savage scum, Seven-Scars does get some assistance from the travelling merchant coyote known as Goodfoot.

Goodfoot is a little more of a complicated character, but can be boiled down as simply being a greedy con artist that’s playing both sides in order to make the biggest payoff. She knows just how to play with Sandorst’s and Seven-Scar’s minds in order to profit all she can.

Though one character seems to not quite fit in with the others, both physically and as a story element. Learoyd is the only human character present in the volume (aside from flashbacks), and is in a way more overpowered than the most powerful wizard or warrior in the entire comic. Of course, he’s a grizzled cyber-soldier with build-in gadgets and combat training to take on giants, but he comes across as being a little Mary-Sue and detached emotionally from every other character in the story, except for Dusty of course.

Learoyd and Dusty’s relationship is strange in a world with animals bearing human-level intelligence. Learoyd treats Dusty as both a tool to get a job done, as well as a cherished pet of sorts, giving him the nickname “Dusty” and going immediately to the terrier to recruit him for tasks. They sort of bond in a way, with Learoyd playing the father figure and teaching the pup that it’s a dog-eat-dog world and that mass-murder is okay if the enemy’s being sneaky at a truce. It’s not a particularly good partnership, but the best ones seldom are.

If you enjoy a good fantasy/sci-fi story featuring realistically drawn animal people, and don’t mind bouts of violent action and sword-slashing, then this comic might be up your alley. If a numeric score must be given, then a 8/10 seems only fair.

With the recent release of the second volume early 2017, it’s a near-perfect start to a great series.

You know what the funniest thing is I just started streaming Major/Minor because they won the Ursa 2016, and so your name of Rook the Ferret had me scratching my head as an odd coincidence.

But I guess it wasn't, you are the Rook the Ferret which is featured in that game.

It's a small furry world I suppose.

Not too terrible for a first article, loved your use of art in the piece. My critiques would be that there are some information that us as furries would already be aware of (aka, that comic books are for kids is a stereotype, etc)

Yep, that is indeed me. I am THAT Rook the ferret.

I actually write quite a few comic reviews for general audiences. I only started this past year thanks to my journalism course, but I did find quite a bit of stereotyping with comics when I discussed them with my peers. Though I believe kids should read comic books and I often see some in the aisles at my local book shop, I've actually had to warn their parents about the content of some publications on the shelves.

Anyways, yes, it is indeed a small furry world. I was actually told by Dronon in person to submit something to this site.

MiRoscoe, when anime fandom began in the 1970s & '80s, did we have to warn people that Animation Isn't Always for Kids!

Yet I remember watching guys getting impaled and dying on Sailor Moon and over-exaggerated fighting in Dragon Ball Z during the 90s. This was daytime television. It was marketed to kids, and parents just looked the other way until something drastic is displayed.

Same goes with comics. I think I was five when my parents got me my first issue of Aliens: Wraith, which had people being impaled and shot to death. Of course, nothing was really as graphic as guts for garland and other visceral details, but the line is pretty thin sometimes and warnings are not always displayed on covers in stores.

Then again, if the warnings were displayed on the covers, would people willingly buy them if it meant taking it to the cashier for their judgement? I know I wouldn't have bought Shame if there was a sexual content warning on the cover.

As for anthropomorphic cartoons in the 80s... I can only name one cartoon that had an explicit warning; Fritz the Cat.

Always loved the art when I saw this in comic stores, but I never got it because I was always at an awkward starting point or on a hiatus when I had the money. Thankfully someone got to it!

I simply adore the art as well!

Not 100 per cent sure what you mean by the rest of your comment, but the book is one of those I found in a place I wouldn't expect it... In the bargain bin at my local comic con, right there in the front of the stack. Bought it immediately and I don't have regrets; save the wait for the next volume to come out...

I buy individual issues; I didn't notice it until it was about halfway through what I think was this volume's run, and then I had no idea what was going on, and I was already on a budget, so I never added it to my pull list. Also, I lived in a rural area some 100 miles from the nearest comic shop, so I didn't get to town very often.