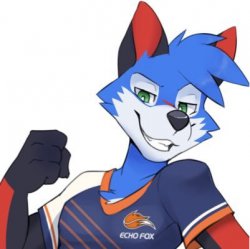 In comparison to many forms of media, furry as a fandom as a concept is relatively young. Likewise, in the world of competitive sports, the once fledgling video game sports community is witnessing a major growth in popularity. Over the weekend of September 16th, these two world eclipsed as a furry by the name of SonicFox took the grand prize in the Injustice 2 Pro Series tournament: $120,000. You could get a very nice fursuit with that kinda scratch, or you know, college or mortgage money if you want to be responsible adult I suppose.

However, this isn’t a Cinderella story coming out of nowhere, SonicFox is a record holder in Guinness for his many Injustice tournament wins. His adapt and flexible style in the fighting game genre is well respected.

But in case you missed the blue furry fury outfoxing his competition, you can watch the full event at Twitch. The grand final starts at the 8 hour and 48 minute mark.

"The tournament was arguably the highest-profile event in history for any NetherRealm Studios (NRS) game, which includes both the Injustice and Mortal Kombat series."

I was shocked it was on ESPN. and then I didn' think he was a furry. Just someone that used the name.

Esports have been on espn for a minute now.

With the amount of overlap between furry and other nerd stuff I'm surprised the use of furry avatars as the player's public face, but with so much money involved these days I guess there's a professionalism to it.

Also, if I remember correctly this guy wears blue fox ears to tournaments.

He was wearing his badges on his chest when he did his after game interview that I could see. His fursona pixelated like mega man, etc.

He wore ears and a tail to the Injustice 2 grand final.

I was barely paying attention. It was late at night and i was just looking for something as background noise.

He's a legit cool person to spend time with too. Always happy, receptive to other peoples jokes. Someone who deserves to be the best.