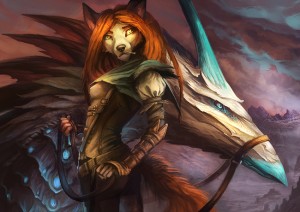 On Wednesday, March 24th, TrekWars: The Furry Conflict will officially release it's first installment of fully scored, effects mixed and voiced pieces of Audio Theater pieces based on the written storyline of The Furry Conflict. It's the result of over a year of work by many talented voice and sound artists, and will be available at that time for download from audio.furryconflict.com. Be sure to have your speakers up and working for the big day!

More a sort of Apres Vie

The BBC has announced that they're going to air the last three books in the five part HitchHiker's Guide to the Galaxy trilogy as radio plays! Further information below.

Jerry Beck's CARTOON RESEARCH website reports on "Ferretina", a theatrical animated musical feature in production from the A&A studio in Toronto. Beck says that it looks like it is designed to appeal to Furry fans, but that "this has the smell of impending doom about it". Read more about it on CARTOON RESEARCH.