In an Ashville, North Carolina park, two men were arrested over allegations of setting off an improvised explosive device, consisting of cardboard tubing and gunpowder, at the remains of the Vance Monument. They possessed these devices during the fourth of July celebrations occurring downtown. One of the two arrested, Chioke Fugate, is a person in the furry fandom known under the fursona name TechCoyote.

The identity can be confirmed via videos they had of themselves at the gun range matching the person photographed in the mugshots used in press reports.

Fortunately, no one was injured during this event. TechCoyote is current being held on $15,000 bond and is charged with possession of a weapon of mass destruction and going armed to the terror of the people.

Romance and sex have always surrounded travel, and the vehicles we use for it. Even in the age of mass transit, there's still a thrill in leaving the known behind and moving as a stranger among strangers.

A sense of movement, freedom and adventure pervades these seven tales of M/F erotica, each set in, or set in motion by, a different form of transport. Fursuiter Lemonade Coyote dies in crash while on EMT duty Fursuiter Lemonade Coyote/Cyrus (Timothy McCormick) is reported dead after another vehicle broadsided his ambulance early this morning. He was 24. [tip: Scott J. Fox]

While not on duty, Lemonade enjoyed fursuiting. His suit's bright and vibrant pink and yellow was true to the name. He was passionate for sticking up for what was right; once saying his dream job was to be a homicide detective.

This isn't the first time that a motor vehicle accident has prematurely taken away a furry fan. Automobile accidents have become a leading cause of death in the fandom.

Valley Dog is a full-color on-line comic created by Michael Adinso Rebrekal, also known as Mike Folf. “Born and raised in the affluent and bustling capital of Washington, DC. The young Francis Gris knows of nothing but a life of strict and stern professionalism, shunned from the likes of artistically creative endeavors. This all changes when, for business reasons, the coyote and his family move across the country to the small town of Silvercreek, California. In order to maintain his lifestyle, Francis’ parents enroll him into Picasso Charter High School – the one school in town that is renowned for its emphasis on professionalism. However, it soon turns out that the school (and the town as a whole) is anything but.” You can find out more and get regular updates at — where else? — www.valleydogcomic.com. 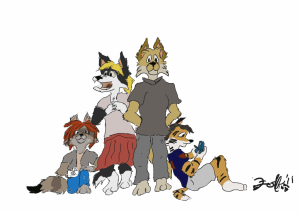 I hate stories that are so carefully constructed that a reviewer can hardly say anything about them without giving away spoilers. Well, Winter Games is set in Gold’s Forester Universe, although it is not connected to any of Gold’s other stories. It contains mentions of Millenport and other Forester locales. It is the fifth of FurPlanet’s “Cupcake” booklets, less than novel length.

Winter Games is a work of anthropomorphic fiction for adult readers only. (publisher's advisory)

Sierra Snowpaw, a 33-year-old snow leopard, checks into the Lonnegan Ski Resort, apparently just on a relaxed vacation although it soon becomes obvious that he is looking for someone. Sierra does not let the search distract him from having steamy gay sex with Bret, the resort’s pine marten desk clerk.

The novella alternates in short chapters between the 2012 “now” and 1997, when Sierra was a teenage student at Tartok Ecole Internationale in Europe, presumably setting up the explanation of whom Sierra is searching for and why, and why this person is avoiding him. Yes, there is still undiscovered Furry fiction out there. I ran across this now-twenty-three-year-old novel at the NASFiC in August 1999, and asked people about it there and at Aussiecon Three in Melbourne the next week. Nobody had ever heard of it, except for the dealer who was selling it, and Tim Powers who was accused of writing it.

By 2011, nobody in Furry fandom had still ever heard of it. It had gotten some notice in s-f fandom in 1989, though, as a totally psychedelic s-f novel. Locus said that the two pseudonymous authors were really the single Timothy MacNamara.

How may syllables does the word 'coyote' have?

According to a recent story on NPR, a large number of coyotes roam the streets and parks of Chicago. The 60 mentioned in the article are those monitored via tracking collars; there are many more uncollared ones. The tracking is part of research by The Cook County, Illinois, Coyote Project.

A new take on Wile E. Coyote is popping up in 3D shorts shown before Warner Bros. movies.

This short, "Coyote Falls", was shown before Cats & Dogs 2. Future shorts are expected before Legend of the Guardians ("Fur of Flying") and Yogi Bear ("Rabid Rider"). Extended versions form part of The Looney Tunes Show, airing from November on Cartoon Network.

Yippee Coyote, one of the many suits of Californian fursuiter Jimmy Chin, has won the 2009 Fandom's Favorite Fursuit Fracas out of 326 entries. Yippee won with 327 votes to Frisbee's 283 – a lead of 44 votes.

Both links have pictures of the coyote aboard the train.

PORTLAND - An unexpected rider was spotted on Tri-Met's Airport MAX Red
Line on Wednesday, February 13 around 11:30AM. The small coyote boarded
at the Portland International Airport station. Port of Portland Airfield
Operations and Wildlife staff found the coyote and quickly released the
animal. Coyotes go out of their way to avoid humans and are more likely
to be afraid of people than vice versa. Tri-Met officials aren't sure if
[the coyote] had a valid transit fare.