We’ll let the creators of Beast’s Fury speak for themselves:

Beast’s Fury will be a 2D, arcade-style fighting game featuring anthropomorphic characters. It is currently being developed by a small, passionate team of individuals who are both gaming enthusiasts and professional programmers. The game will not only involve action, but also features engaging story lines, intriguing characters, exotic arenas, and a killer soundtrack! Inspired by famous 2D fighters such as the Street Fighter series and Skull Girls. If you have any burning questions about the project, drop us a line on our Facebook page!

They also have a current Kickstarter campaign, seeking out funding to help them hire more animators, which in turn will help them get their game demo up and running and out in the wider world much quicker. 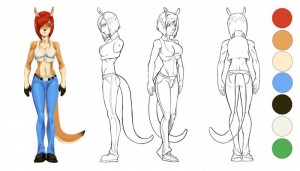