And another furry Kickstarter campaign of note: Fox Hollow Tales is the creation of Jennifer Carson (writer, designer) and Pat Ann Lewis (illustrator). It’s a series of full-color illustrated books for young readers, featuring the adventures of a multi-species cast of characters in late 19th Century New England. The first book in the series, Wojer and the Wizard of the Wood, is nearing completion — and the creators are seeking crowdfunding to get it there, as well as to get started on the second book in the series, Wojer and the Black Knight. Visit their Kickstarter page to find out more, and to see a video trailer for the series. 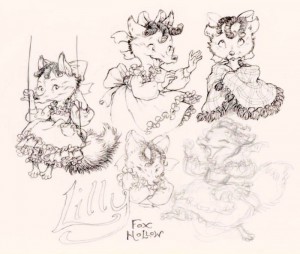 My first thought when I read this was to wonder if it had any correlation to Tom T. Hall's 1974 album "Songs of Fox Hollow", which included songs like "The Mysterious Fox of Fox Hollow" and "Sneaky Snake", and despite being a children's album, it peaked at #3 on the Billboard country albums chart. However, the Kickstarter page did not give any indication that it is related.