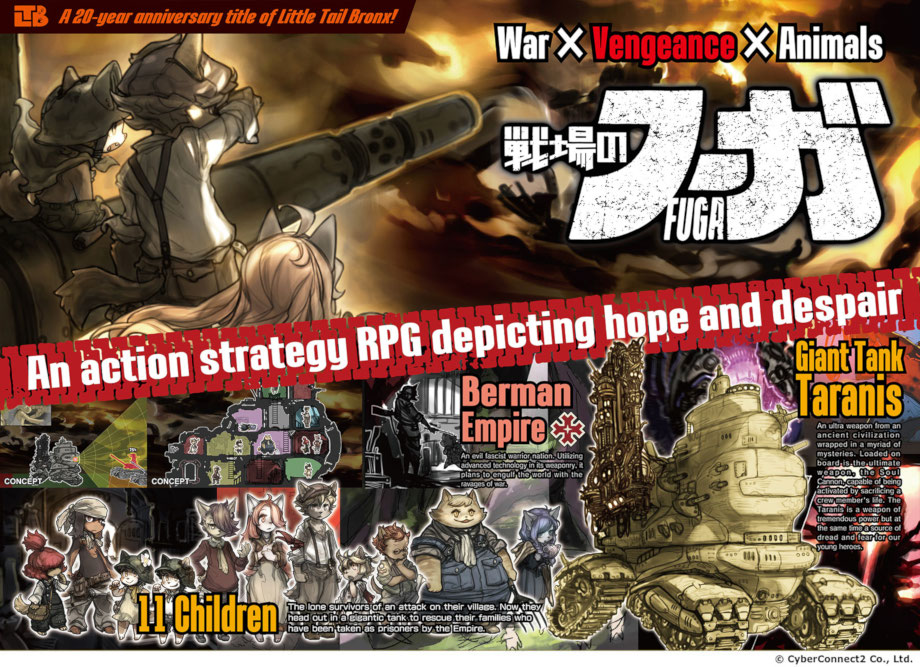 We've made the decision to announce our newest titles before they've even begun development. You may ask: "Why?"

It's rare for someone who's just joined a game company to immediately be put into an important position on a brand new project. After all, new staff members are usually assigned to already-in-place large projects, and then work their way up little by little.

However, this time, things are different. This time, we're trying to put short-development-time, small-budget projects into motion as a new system of game production. We are fully prepared to put someone with like-minded aspirations, skills, and experience to take on an important position right off the bat and serve as the backbone for one of our new projects.

The company has three studios, two in Japan and one in Canada, that are expected to work in all three projects at the same time:

Those interested may wish to read and apply for job openings in CyberConnect2's offices in Montreal, Canada or Fukuoka and Tokyo, Japan. Knowledge of the Unreal game engine and relevant conversational language skills in French and/or Japanese are highly recommended.

But will be be full 3D, and not for babies? I really want that.

I doubt any game where you contemplate feeding a member of the underage crew into a cannon to power it will be 'for babies'.

Another upcoming furry game that deserves someone writing a piece: https://www.kickstarter.com/projects/106061903/backbone-pixel-art-detective-adve...

I know what you're about to say; "Oh, boy, here comes this new guy trying to start drama with bad faith arguments."

Children forced to participate in a war, the eldest is twelve while the youngest is four. Soul-devouring weaponry being powered by said child soldiers. Nazi-like army targeting a specific species. Bigotry and genocide. Forcing a ****ing nine-year-old to commit suicide later down the road if you, granted, don’t play your cards right. Twelve-year-old goes on a killing spree judging from a hidden cutscene if I understand correctly. Angst, angst, angst.

It...it's mean and pointless. Jin would definitely be my favorite character if he wasn't written as the stereotype of the bigot trying to let go of his hate. Hello, Clint Eastwood!

Listen, there was a time where I was indeed just as gratuitous way back in high school as whoever wrote Fuga...but I’ve grown out of it. I no longer have to pander to the lowest common denominator with how "dark," "edgy," or "angsty" one can possibly be. That's the problem with much of today's media, I feel; it's all shock for the sake of either shock or making a cheap buck. I'm sorry, but Fuga may as well be Oscar-bait for furries. It's another maggot on the corpse that is "the sign o' the times" wherein demand for darker, edgier, grittier material has skyrocketed and hence dominated entertainment.

And before anyone asks, no, turn-based RPGs are not my cup of tea.