The storyline is the weakest aspect of the game. The official website describes it as "unique in that it purposefully has no dialog or narrative". The game does present a story through stone murals, which seems to suggest that foxes were worshipped but disappeared, and their worshippers died. But that is just one way of interpreting what is shown.

Even if we have a vague idea of what has happened, without dialogue, we have no idea why anything happened or what the character's motivations are now. Aside from the dead shamans, there are essentially two characters—your fox, and the spirit that accompanies it. It's hard to form a bond with the fox when you don't know why it is doing anything. Is it meant to be conscious of its choices? Is it going on this adventure because it is forced to, because it feels a sense of duty, or because it just happens to be travelling that way? And, with a one-sided portrayal of what happened, can we really trust the spirit?

According to the Steam store, Spirit of the North is "inspired by the breathtaking and mysterious landscapes of Iceland" and "takes root from various pieces of Nordic folklore." I only know this because I read it outside of the game. Inside of the game, I had no idea of the location nor did I feel like I was learning anything about anyone's folklore. Which parts are from the game, and which are parts from Icelandic culture? I have no idea, and I think that's a pity. 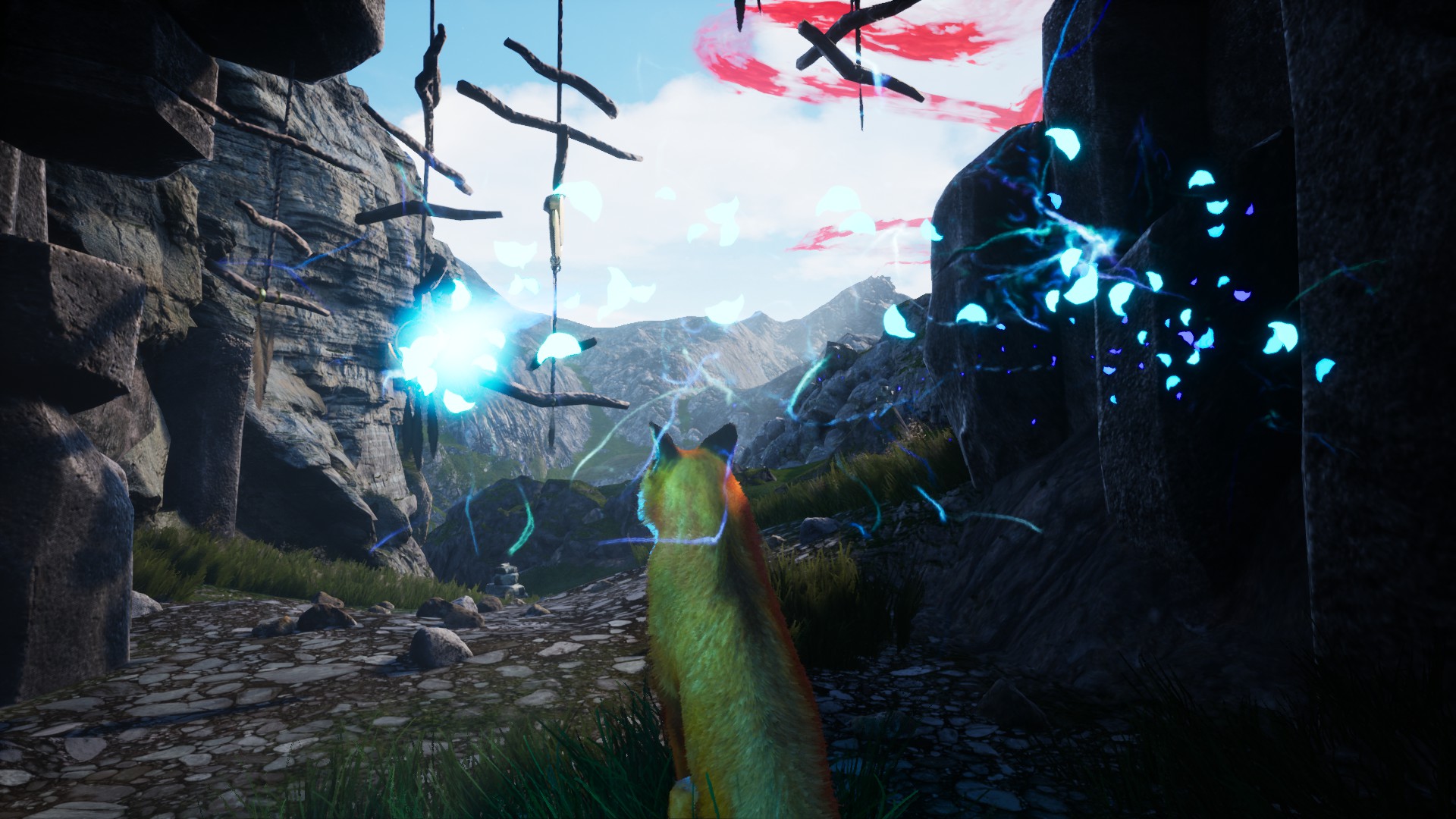 The gameplay in Spirit of the North is a simple matter of exploration and puzzle-solving. There is decent variation in the puzzles, although it's predominantly powering up stone tablets, and you gain new abilities as you progress, which keeps things feeling fresh. Aside from a few "plants" which will need to be destroyed, there are no enemies at all, which means that you can neither be killed nor injured (except for certain scripted scenes). It also means that there is no fall damage, which, while useful, leads to the odd phenomenon when you fling your fox off a multi-story cliff and then just trot off with no consequences.

Your character's movement is a little stiff but, given the simplicity of the game, it's certainly not a deal-breaker. The controls are simple with some buttons fulfilling several functions; e.g. the same button will let you bark, activate magic flowers, pick up staffs and interact with certain objects. For the most part, this makes sense as all these activities are done either with your mouth or are barked as instructions for the accompanying spirit. However, the priority is not always ideal, as once I set down a staff in front of a rotating puzzle and found that I could no longer pick it up again as the puzzle would always take priority. 'Twas a minor issue but annoying nonetheless.

There are other aspects of the game design which could be improved upon; specifically a combination of large maps and unnecessary backtracking. If you are going through them once, the maps are suitably-sized but, for some reason, you can only use your spirit powers once, before having to go recharge them at a flower. This can mean that you will travel to a location, find it blocked, backtrack to a flower, go back to destroy the blockage, backtrack to the flower again, and finally return to activate a stone tablet that had been blocked. The penultimate chapter, a sprawling maze of a forest which is hard to navigate and has minimal directions, is a major exception to the maps only being too big with backtracking. That chapter, as beautiful as it was, was a nightmare to play, and went a long way to erasing the positive feelings that I had built up around the game. 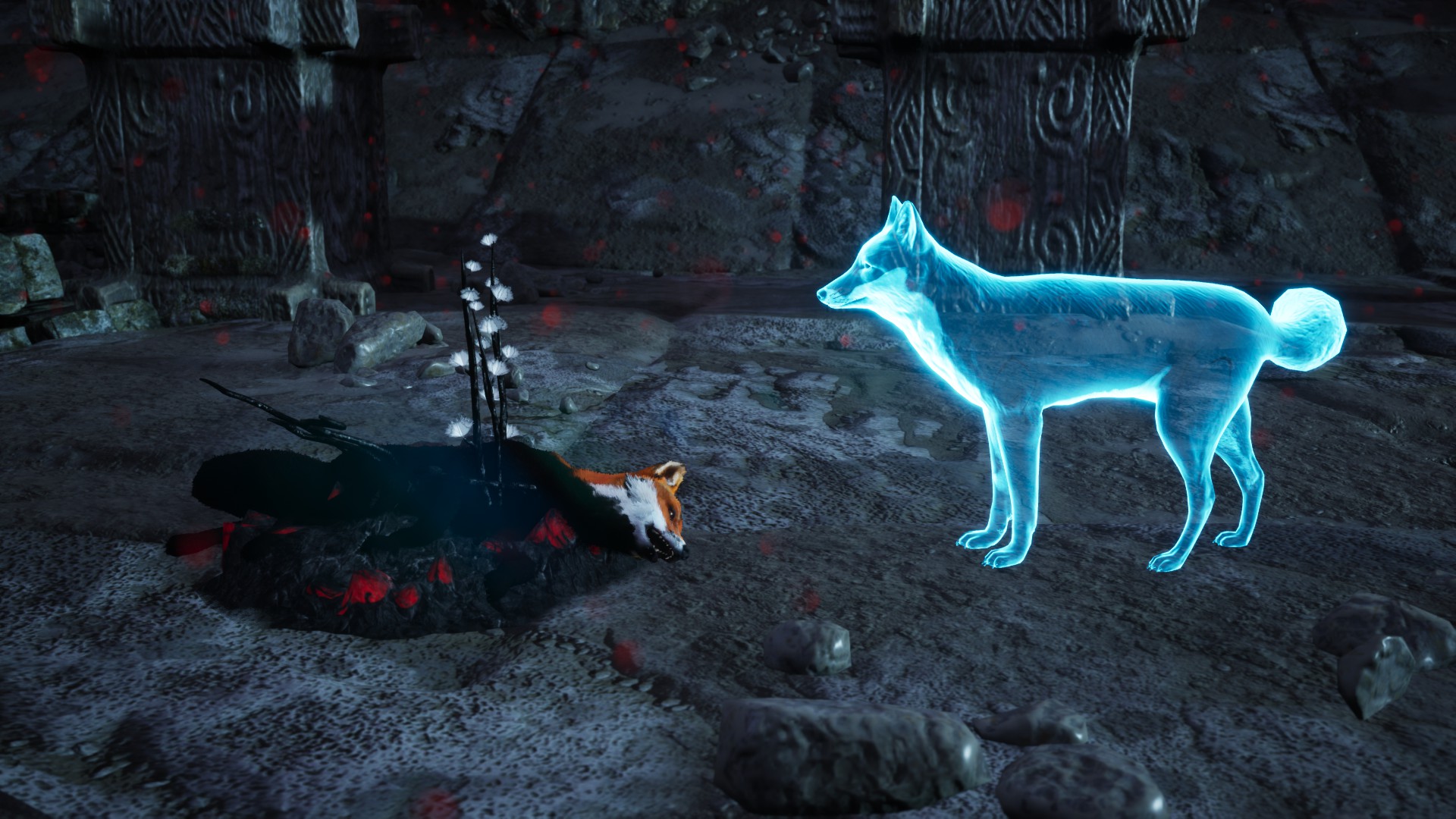 Spirit of the North is beautiful with a suitable score and each chapter having its own, unique aesthetic. The developers were so pleased with how it looks that they include a photo mode where the game will be paused and you can freely move the camera to take the perfect screenshot. But, sometimes, things look better from afar.

I will not say any part of the game is ugly, but I will note that, when you zoom in, you will notice that the models and landscapes are best seen from a distance. A few more movement animations for the fox and a higher resolution model, would've gone a long way. The sound effects can be limited which is a little odd when your fox is weak and limping but still sounds perfectly fine when it barks.

Does this fox look familiar?

As I was playing, I couldn't help but note some similarities between Spirit of the North and some other games with a fox protagonist. The gameplay is quite similar to The First Tree, and both of them feature a section where your fox is essentially running through open space. Spirit of the North looks many times better than The First Tree but, if one wanted to just relax, the narration on The First Tree makes it easy to just lose yourself in the story. Then there's Seasons after Fall, a small platformer which sees a little fox possessed by a spirit. The similarities between them are mostly superficial; both have foxes as the main character and some of the animations are the same, but the unresponsive controls and stuttering of Seasons after Fall meant that I never completed it. Finally, there is more than a little resemblance between Spirit of the North and the still-unreleased This Dead Winter. In fact, given their similarity and how long it had been since I watched the trailer for This Dead Winter, I actually mistook Spirit of the North for it! If you want games where you play as a fox, there are many options right now, and This Dead Winter will be one to keep an eye out for.

While this is far from a masterpiece, it is very enjoyable, even if it alternated with moments of frustration. Bearing in mind that this was produced by a two-man development team, we can forgive many of its flaws. Now that I have finished it, I do find myself missing it a little. Overall it is simple, pretty, and calm; all good things when you might be trying to relax during a stressful time.

Two minor additions, one that I didn't really find space to include in the review and one comment from after writing it.

Water in this game is so frustrating! Your fox swims so slowly and if even so much as its feet get wet it will lose the ability to jump and move at a snail's pace! There's also a cute animation of shaking the water off when you get on dry land. But it also means you stop for a moment every time you get out the water because you can't skip it. Buuuut, you can avoid triggering the animation if you jump immediately as you leave the water.

Finally, subsequent to writing the review, I watched a person blind play through Spirit of the North and at the end I was feeling all affectionate to the game again. Still not brilliant and it has some very frustrating flaws but it is quite a charming game.

I didn't have too much in control issues in Seasons After Fall.

Interesting. I found them very unresponsive with a quite a bit of lag between input and action. When I looked at the reviews of the game, I saw that many others had had the same problems.

I'm not sure what it is about foxes that seems to do this, but when I do Google search for the games and add the phrase "walking simulator", it seems to come up a lot, regardless of puzzles and other gameplay elements:

Spirit of the North just won the vote to be the next game played on my Saturday night furry game streams, so will be starting it on March 6th:

Ah, nice. They actually released an update a week or two ago which is supposed to have given a new skin and increased the resolution of the fox models so some of my original issues may have been fixed. I haven't actually looked at the new update (I already have 100% of the game's achievements).

Perhaps worth having a look to see if there's anything worth updating the review for.

Ah Rakuen Growlithe.
It was probably an incorrect thought to think that you'd actually get a job now, contribute positively to society and actually pay taxes. But, lest we forget, lordship is as much a numbers game as it is a form of pure self pleasure or indeed a pure form of self-praise and entertainment.