Okay — we had not heard of Vincent, the creation of one Vitor Cafaggi, but we stumbled across Vincent Volume 1: Guide to Love, Magic, and RPG thanks to Previews. “It’s been some time since Vincent has had a good day. Sitting on the bus, he still doesn’t know that his life is about to change. Forever. At that moment, outside the bus, Lady lets a little smile escape when recalling an anecdote about tomatoes. Vincent sees the smile and his world turns upside down. Now, armed with his nerdy RPG friends (not counting Bu, who is like a sister to Vincent and full of solid wisdom), an impressive magic act, and a insatiable love of roast beef sandwiches (no pickles, Vincent hates pickles), he must learn how to navigate his first non-platonic love and what may happen if things don’t go as planned (as they often do in the life of Vincent).” Got all that? Take a look at this new full-color graphic novel over at Target.com. 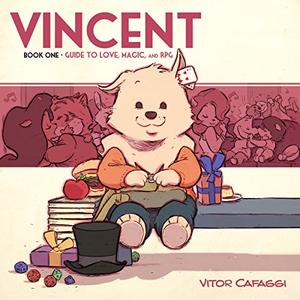 Shoe ad drops - gets furries to "converse" about marketing and fandom

In Brazil in March 2019, a furry bowling event had gathered under the name Furboliche. In attendance was Crash Azarel, a popular fursuit performer who had been guest of honor at Brasil FurFest the previous year. At the bowling event there was also another group in attendance to take photos of the fursuiters, to show them wearing sneakers for an advertising campaign for Converse (a brand bought by Nike in 2003). These adverts have been recently released on their Argentinian and Australian sites. Crash shared the news of the marketing launch on his Twitter feed.

WELL CONVERSE-ALLSTARS's FURRY COMERCIAL IS OUT.
So far only in Australia and Argentina, but coming soon near you! XD on their site and on their shops! pic.twitter.com/TMdbVWmCkG

Afterwards, some furs began to be critical of the collaboration, concerned about using one's fursona for the profit of another, and fears of corporate culture and marketing infiltrating the fandom. True to its brand name, the shoe being worn by the furs of Brazil were starting a conversation on outside marketing within the fandom.

Update 7/27: Brasil FurFest has announced a sponsorship by Converse since this article was published.

Brazilian furry convention to be Abando-ned after 2016

Brazilian furry camping convention Abando is to end after next month's instance, according to a video posted by co-founder Reyres (translated by Puggy):

He basically explains that Abando became somewhat out of hand, it became way too expensive, Abando is a little event, and organized by few people, that do it just because they like it, but these things consume way too much time, effort, and in the case of this one, much, much money, since it requires the rental of an entire nature park, regardless of the places getting sold out or not.

Some of the staff, over the years, had to step out for many reasons; some are getting married, having children, moving away. And taking care of the event is a big task, not to mention that lately, it threatens the financial security of the whole staff.

Depression: Not just for humans

We've known for ages that animals are sentient beings, albeit on a lower level than humans. These stories provide insight into animals' thought processes and emotions, how they cope with sadness and disappointment, and how they can recover when conditions improve.

Our first story is about Gigi, a Doberman Pinscher, who became depressed after losing her litter of two puppies following birth complications.

The second is a modern take on The Lion King: Agence France-Presse and Brazilian media report that a pair of lion partners were reunited at a zoo in Brasilia, the capital city of Brazil, after the male became so depressed by their separation that he stopped eating.

The interviews – named Muzzle to Muzzle – are presented in a roleplaying conversational style reminiscent of The Tame Talk Show, which Hwei produced.

According to Koga SilverDragon, the piece "describes in a succinct and clear way the 'basics' of the fandom." Included are photos of Canadian fursuiters Inari and Rappy Raptor.

The fursuiters played as extras to Luciano Huck, who was disguised as one of them.

Those who don't understand Portuguese may want to skip to 3:40 once it's loaded.

Popular Brazilian TV show to use fursuiters in prank

Fauna Urbana reports on recent fursuiter involvement in Caldeirão do Huck, a Brazilian comedy TV show watched by millions. The episode is to air April 17. A fan video accompanying the coverage shows interviews in which fursuiters explain furry fandom from their perspective.

Unlike the Fantástico feature, only fursuiters are involved; some furs fear misrepresentation.

Update (Apr 19): The show has been postponed to next Saturday.

Currently available is a fully-translated version of the original story, and a brief summary of the first edition of FurryBrasil podcast Focinho a Focinho (Snout to Snout), which includes an interview with Abando staff Aniki Geelong and Ekevoo Guepardo.

Site leaders hope to attract English-speaking readers, and also intend to translate certain Flayrah news items into Portuguese for their local audience. Articles on both sites are normally available under the Creative Commons Attribution-ShareAlike license.

The event attracted 37 attendees — 15 more than last year, and close to the site limit of 40. Attendance cost 100 Reals (US$55), which covered the bus to and from São Paulo, four meals, workshop materials, prizes and gifts, including a t-shirt.

Some shoppers and their kids get more than they bargained for, meeting up with Brazilian furs followed by a TV crew (translation). The show also covers members of the LondonFurs.

The piece was discussed (translation) on Portuguese-language news portal Fauna Urbana; apparently much more footage was taken. Although pleased with the general tone, local furs were disappointed in the focus on fursuiting.

Brazil is home to furry camping convention Abando, held near São Paulo since 2008.

The Fundação Parque Zoológico de São Paulo also known as the Sao Paulo Zoo, is auctioning off 143 animals from 10 different species to pay for their renovations, and endangered species research. Though most zoos just auction off pictures or 'adoptions' of the animals, this is the real thing. You can get a pair of peacocks for $1000 or a trio of porcupines for $1500, along with a care booklet.
Animal welfare groups are concerned, but the zoo says all animals will be microchiped to track their ownership. Wilson Almeida Lima, from Brazil's institute for the environment and natural resources said: "If there is an accusation of bad treatment of those animals we are going to punish the responsible. We hope whoever buys an animal takes good care of it." The zoo hopes to raise at least $100,000 though the sales.