Can Illumination Entertainment produce anything besides more Despicable Me and Minions movies? The animation studio is aggressively proving that it can – with anthropomorphic animals. It has already announced The Secret Life of Pets for a July 8th, 2016 release. Now The Cartoon Brew website has announced that Illumination Entertainment will also release Sing on December 21st, just in time for Christmas.

Sing sounds roughly like a Muppet movie, or a cleaned-up Meet the Feebles, with an all-anthro animal cast. Buster Moon, a koala theatrical producer, is producing a vaudeville-style live show. The hopefuls trying to get a part include a mouse crooner, a timid elephant, a pig mother with too many piglet youngsters, a young gorilla trying to break free from his mob family, a punk-rock porcupine and more. The voice cast includes Matthew McConaughey, Seth MacFarlane, Tori Kelly, Reese Witherspoon, Taron Egerton, Scarlett Johanssen and John C. Reilly, among others.

Illumination promises that Sing will have 85 songs! Is that a record for any musical, much less a funny-animal one? 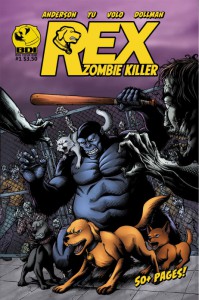 The Onion News Network reports on a development in human-gorilla communication:

The BBC reports that like humans, gorillas play competitive games - even making the game fairer for those of lesser ability.

Dr Joanne Tanner and Professor Richard Byrne of the University of St Andrews performed the research, published in Animal Cognition.

Gorillaz create 'Journey to the East' for BBC Olympics coverage

BBC Sport has unveiled a title animation featuring several anthropomorphic animals as part of their coverage of the Beijing Olympics.[1]

Created by Jamie Hewlett, illustrator of the virtual band Gorillaz and with music by Gorillaz creator Damon Albarn, the animation is based on Journey to the West; an ancient Chinese tale of pilgrimage to retrieve Buddhist scriptures which mixes adventure, allegory, and spiritual enlightenment. Both band members were born in the Year of the Monkey, and were fans of the British TV series Monkey.[2][3]

Depicted in the animation are lead characters S?n Wùk?ng, the Monkey King, and his golden-banded staff; Xuánzàng the monk; Zh? B?jiè (or Pigsy), once field marshal of the Milky Way, wielding his rake; and Sh? Wùjìng (Sandy), an immortal banished from heaven for smashing a crystal goblet, with his monk's spade.

The same story inspired elements of manga and anime such as Dragon Ball, InuYasha, and Ranma ½.

Tim Eldred's: "Grease Monkey: A Tale of Growing up in Orbit"

This is a $27.95 351-page comic-sized hardback from Tor Books, the country's leading science fiction publisher. I think it's their first graphic novel. It's a labor of love that took about ten years to finish, and I recommend it.

The back story is that some time ago, in the early 21st century, nasty aliens came out of nowhere and attacked Earth, killing two thirds of the population, and flew away satisfied. Then good aliens came along to help us recover and enlist us as allies against the bad ones. Because Earth was now underpopulated, they offered to uplift two other species to intelligence. The dolphins declined, the gorillas accepted. Here's the first bit of comic-book SF: even after getting smeared, humans outnumbered gorillas a million to one, so uplift wasn't going to help the population problem. Anyway, they should have also done chimpanzees, which are more numerous and much randier. Well, maybe they had ulterior motives, like leavening humans with a less aggressive species.

It's a very little thing, but that is what makes it such a big thing.

The humorous 2005 murder mystery Owls Well That Ends Well, by Donna Andrews, in her Meg Langslow series (Revenge of the Wrought-Iron Flamingos, etc.), is set at a gigantic yard sale. It is absolutely non-Furry, except for a throwaway reference on page 106 by a minor character that he is planning to break up with his girl friend because she has sold his gorilla suit without his knowledge. Meg Langslow, who overhears this, comments that this sounds like a wise move. She has never understood the appeal of going to a Furry convention dressed as an animal, but he obviously has been enjoying himself and it doesn't hurt anyone, so why spoil his fun?

I think that this is the first time I have seen a reference to Furry fandom in the popular media that has not made a big thing about how weird Fursuiters and the fandom are, but treats them as just a normal convention &/or social activity. This is what we need more of. (Andrews has previously presented a knowledgeable and sympathetic description of TV-program fan conventions in We'll Always Have Parrots.)

A stocky, knuckle-dragging 340-pound gorilla leaped across a 12-foot-wide moat and a wall that separated him from visitors at the Dallas Zoo.

13-year-old Jabari escaped and went on a 40-minute rampage in March, snatching up a toddler with his teeth and injuring three other people before being shot to death by officers.

A symbol of Barcelona and undoubtedly the most famous single animal in Spain (bulls notwithstanding) Snoflake, or Copito de Nieve, a unique albino gorilla, is dying from skin cancer. Lacking the dark skin pigment and fur of a regular gorilla, the Barcelona Zoo resident developed melanoma in 2001, but zoo vets say it's now past any stage on control and it's only a matter of months. Citizens file past to pay their respects to the 40 year old ape, who had only his usual distain for the human visitors.
"When Copito de Nieve is gone, an era of Barcelona will end."

The BBC is reporting good news about slowly increasing populations for mountain gorillas. It might not be much, but it's wonderful hearing some good news about the great apes for a change. It always seems like the news is dire...

The volcanic eruptions in the Congo are not only a threat to people, enviromentalists are worried that the two eruptions (with possibly more to come) may be the last blow to the wild population of moutain gorillas. Between refugee movement, lava flows and enviromental contamination, the mountain gorilla habitat might be damaged beyond the level needed to support the 650 or so remaining animals.