From October 30th to November 11th we had VFC, the virtual version of Fumps’ Weekend Off Fest in Belgium. They raised €212 for De Zonnegloed, a Belgium animal shelter devoted to giving a second chance to abandoned, abused, and dumped animals. Most of these poor unfortunate souls stay with them until their last day, making sure they are never mistreated again.

From November 6th to November 9th we had Furcation in the UK. This online event managed to raise $3,342.73 for the Ferne Animal Sanctuary.

Another lovely online event was Furality 2000, travelling back to Y2K. 3,120 attendees managed to raise $5,846 dollar for the Save a Fox foundation helping their ongoing quests to educate people about the harm of fur trade and rescue foxes from fur farms.

Up next is Furs For Life and who can tell you best about these charitable creatures the TK himself.
[Interview TK Pup]
Note that their current amount raised is currently $46,613!

One of the biggest achievement of this year has to the latest mission from the SpaceX Crew 1 to the international space station in their dragon capsule. A few minutes after launch they revealed a little surprise: Their zero-G indicator was a plush of Baby Yoda, also known as ‘the child’ from the Disney series ‘The Mandalorian’. Zero-G indicators like this are a time-honored tradition for crewed space missions, succeeding the plush dinosaur named Tremor made by the sons of one of the astronaut on a previous trip.

Elephants can be many things, they are quite smart, but one thing they are not is being good at hiding. Especially not this ‘little’ rascal who was caught eating sugar-canes by a local farmer. Our playful giant knew time was up. So what do you do when you are busted? Exactly, you hide. However, it might be a good idea to take something bigger as yourself to hide behind, not a small pole!

More than a fair share of us know World of Warcraft, I still remember going on raids with friends, defeating big bosses, dragons, and other monsters in dungeons. When you play, you often need to use your powers in a special order, and repeat that in an optimal rotation. Now, someone decided to configure their digital piano for it.
The result is oddly musical. But when it comes down to musical encounters, I would love to see them dance in Naxramas, or play as a bard in Final Fantasy 14 Online.

One of the games I have fond memories of is Portal. It has been way too long since Portal 2 was released, and knowing Valve’s relation with the number 3, I do not have high hopes for a sequel.

But the community provides! They are working on a massive mod named Portal Reloaded, where a 3rd portal is adding a new dimension: Time. There will be 25 puzzles to solve and the release is due in April 2021. You will find the steam link in the description below.

On twitter, Riley Riri Winters decided to map popular species per US States and Europe based on data from his Google Ads analytics. The result is fun to look at.

And now I know that I need to be in Colorado if I want to find a fun skunk in my area. Interesting enough the Dutch are not included in the European map. Then again, we are very very good at hiding...sometimes.

And now for our featurette, a very special birb!

Thank you so much for sticking with us till the end.Which brings me to these special people, supporters of this channel:

Next month we will have our yearly countdown, and we will continue our regular show on January 30th!

I've said this on Twitter, but that result coming up in specifically and only in Colorado ... it's a pot thing, right?

Given that pot has been legalized in other states since then, probably not entirely.

Yes, but that could be used as evidence that it's a pot thing; in a newer pot-legal state, the Google searches would be more likely to be like "where pot? now!" whereas in an early-adopter pot-friendly state (such as Colorado) they would have gone past the "holy shit, pot!" stage and developed preferences for a specific varietal or perhaps dispensary, which is what I assumed "furry skunk" could be.

However, actually Googling "furry skunk" (or even "furry skunk Colorado) doesn't seem to back this hypothesis up. I still say that it might be pot related, as Colorado would be an obvious place for people who are in the middle of the "pot enthusiast/furry" Venn diagram to gather.

Also, I had an idea for a scene where a furry smoking a joint is able to successfully hide this fact from a skunk, and when I shared this idea with a, well, what I referred to as a "pot enthusiast" up there, he thought it was funny, so I'm definitely keeping it.

DO NOT STEAL, ORIGINAL IDEA.

Ooooh, further research finds that there is an indica variety known as fury skunk, meaning my first guess may still be correct ... albeit requiring a common typo to work. (Google auto-corrects "skunk fury" to "skunk furry" for me).

Well, anyway, here's an article from a pot site about skunks.

South Park! Is set in Colorado! See, it's all connected! And now! I'm doing! A conspiracy theory joke! And am obligated to post! This image! 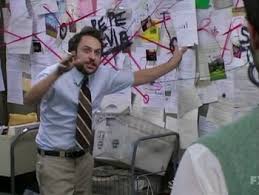 And what is that name behind his head!