Ghosting the Attendees: the problematic trend of conventions hiding their headcount The term "ghosting a convention" is when a person attends and hangs around, but has not paid the organizers to do so. It’s seen as a major faux pas in the furry fandom due to the amount of time, effort and money their fellow fans put forth in order to put on the events.

Those who support the festivities through their patronage, therefore, should be praised for putting their time and money forth to support their gathering of choice. For the relationship between convention and attendee is symbiotic.

Instead, certain events seem to have started to shun the precedent of sharing how many furs attended their celebrations. Like a tree falling in the forest, the con did occur; but if you look back years from now, there will be no hard evidence of how many gathered. In essence, it is the attendees who have been ghosted.

Which is why I am writing this piece today, concerning a worrisome trend that a handful of events seem to have taken - including some of the largest events in our fandom. Conventions, as of late, have been trying to push away from publicly putting forth their attendance counts.

Update 5/24: An updated tentative count was released by BLFC in the comments below.
Update 6/16: FWA has provided their counts with the video of closing ceremonies in comments below.
Update 6/16: AnthOhio, which took place in late May after the article was written, has as of today not released attendance numbers on any internet media platform. They did release charity numbers of $13,000 raised.

Recently your humble ed-otter and his mate, Sy Sable, put up on YouTube a recording of the presentation they did at Further Confusion 2014 (in San Jose, California) celebrating 25 years of furry fandom conventions. That’s right, 25 years ago (well, 26 now!) in January of 1989 the very first furry-themed fan convention and seminar, ConFurence Zero, took place at a little Holiday Inn located in Costa Mesa, California, with a membership of just under 100 and an actual attendance of 65. At Further Confusion last year the co-directors of the original run of ConFurence (Mark and Rodney, sable and mink) lead a well-attended discussion about the early furry cons, how ConFurence came about, and where they’ve been since then. Afterwards, Changa Lion (of Furry.Today) went about creating a slide show and video sampler to go along with the recording of the discussion — and now, it’s available up on YouTube. Have a look — and learn some furry history. 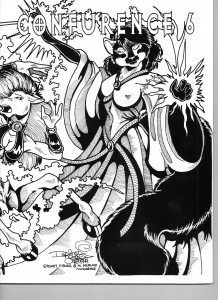 What happens when the Sci-Fi Channel visited ConFurence 4 in 1993? Some surprisingly positive media coverage. Archive copy provided by the household of the Prancing Skiltaire. Crossaffliction is working on a sort into categories of all Flayrah’s posts. He has started at the beginning in January 2001, and is so far through September 2004. He notes that as of that date, there are only seven Furry convention reports. “[T]hey seem to have fallen out of fashion as of late. In case you hadn't noticed.”

He is right. I have complained about the difficulty that this makes in writing a history of Furry fandom. Early s-f fans wrote convention reports of five to ten pages in their fanzines. When Sam Moskowitz wrote his history of s-f fandom in the 1930s, and Harry Warner, Jr. wrote his of s-f fandom in the 1940s, and I wrote a history of the World S-F Convention from 1939 through 1948 in 1976, we had no trouble getting information on the conventions because of the long, detailed con reports in the fanzines. But there has been little of this in Furry fandom. A Furry con report tends to be little more than, “I went to the con and I had a good time”, or, “A lot of people caught the con crud”, or posting a half dozen or so photos of unidentified Fursuiters.

To do something about this, here is my very incomplete report of CaliFur VIII just past. I hope that other attendees can add to it.

See more: Videos of the convention by FurriesInMotion.

Do you think southern California needs a convention to replace Confurence?

Here is a direct copy of what I just finished posting on AFF.

Announcement from Uncle Kage Regarding Media at Cons

On alt.fan.furry this morning, Doodles announced Confurence is dead...read on...

ConFurence 2003: The Furry West will be April 25-27 at the Hilton Burbank Airport and Convention Center, in Burbank, California. This marks our FIFTEENTH annual anthropomorphic convention and exhibition in Southern California, which is quite a milestone.

The hotel has promised to keep our room reservation block open all the way up to the days of the convention, and our room rates are locked in. Standard hotel rooms are $102 per night and Jr. Suites are $135 per night, for up to two guests in the room. 3rd and 4th guests pay an additional $20 each per night.

The Hilton Burbank Airport is a pet-friendly hotel. Contact them directly for their specific policies so you might not have to leave your pets at home.

ConFurence 2003: The Furry West may be the 15th year of our convention, but it is full of things never before tried at ConFurence:

ConFurence is Chock Full of Guests!

Our Guests of Honor at ConFurence 2003: The Furry West include the popular artist: Dark Natasha, the incredible fantasy artist: Theresa Mather, anthropomorphic sculptor and long-time fan Ruben Avila, popular filksinger, Leslie Fish, and popular artist, Roy D. Pounds. Rounding up our guest lineup is the one and only Omaha Sternberg, and Comic Book Artist Joe Staton!

But we didn't stop there! Also Appearing are several notable guests who are interested in attending panels, night events, or setting up a table in the Dealer's Room:

We just got permission to announce: Joining us at ConFurence 2003 will be CHARLES ZEMBILLAS.
(Who?)
Charles is the founder of The Animation Academy, a school for aspiring animators and cartoonists in Burbank. Previously, Mr. Z worked as a game designer for Sony -- where he designed the characters of Crash Bandicoot, Spyro the Dragon, and Jak & Daxter.

Only Two Weeks Left for FREE MEMBERSHIPS at ConFurence

You must reserve your hotel room for CF2003 before February 15, 2003 if you intend to sign up for the Furry West Homestead Act of ConFurence 2003.

"Furry West Homesteaders" (Up to 4 in each hotel room) get free memberships to the convention, in addition to some of the same benefits that Sponsors of the convention will receive. This includes getting into the Art Show a full hour before anyone else is permitted to enter.

I wish, oh I *REALLY* wish I could tell you who just accepted to be a guest at ConFurence 2003... However, due to contractual obligations, he would have to jump through legal hoops and we would end up getting buried in paperwork before being able to make any kind of announcement of his being a guest at any public function.

However, I *CAN* tell you that he is the Director of one of the anthropomorphic Motion Pictures nominated to receive this year's Ursa Major Award and he will be at ConFurence 2003: The Furry West as our surprise Guest of Honor!!!

We just *can't* tell you who it is before the convention, but he is the director of one of the above films.