The winners of the 2013 Ursa Major Awards for the best anthropomorphic literature, artwork and websites published in 2013 were announced May 31 at a ceremony during Califur 10.

Many categories had undisputed leaders; others were very competitive. Slightly Damned edged out Twokinds by just ten points in Best Graphic Story (which it won by more than 500 points last year), and Best Published Illustration was decided by eleven points.

Voting is now open. Due to a technical issue, nominators will need to acquire a new key. The deadline is April 30.

As is not unusual, there were so many nominations for the fourth, fifth, and sixth place nominees in most categories that one more nomination could have made the difference between a title’s getting on the final ballot or not. Please nominate next year.

Nominations for the 2013 Ursa Major Awards, for the best anthropomorphic movies, novels, comic strips, games, etc., will close on February 28. Voting for the winner will begin on March 15 and will close on April 30. The awards will be presented at CaliFur X on May 30 to June 1, at the Irvine Marriott Hotel, Irvine, California.

If you have not nominated yet, you have only a few more days to do so. All titles first published or released during the 2013 calendar year are eligible. The awards are given in eleven categories: Motion Picture, Dramatic Short Work or Series, Novel, Short Fiction, Other Literary Work, Graphic Novel, Comic Strip, Magazine, Published Illustration, Website, and Game. The final ballot includes the top five titles nominated in each category.

To nominate (by February 28), and to vote (March 15–April 30), go to ursamajorawards.org. The 2014 Recommended Anthropomorphics List will be posted after March 1.

Nominations for the 2013 Ursa Major Awards are now open. The awards, voted upon in 2014, celebrate the best anthropomorphic literature and art first published during the previous calendar year.

The awards are selected by a two-stage process of nominating and voting. Members of the public send in up to five nominations in each of the eleven categories. The top five nominees in each category (more in case of a tie) are then presented on a final ballot for a public vote.

Many nominations are likely to come from the 2013 Recommended Anthropomorphic Reading List, which has been built up through prior recommendations. However, inclusion on the List is not necessary for nomination if a work is otherwise eligible.

Sorry, but my CaliFur report this year is even skimpier than last year’s. That’s just the way it is. Hello again! Back from CaliFur in Southern California. And speaking of that…

We’ve mentioned before Fursona Non Grata, the new furry-themed play written by Jeff Goode (creator of American Dragon: Jake Long and The Eight: Reindeer Monologues). In case you need a recap: A young woman has been raised by furry fans. One day, she brings home her fiancee’ to meet the family… As it turns out, Jeff and the Sky Pilot Theater Company staged a readers’ theater version of Fursona Non Grata at CaliFur this year — to laughter, thunderous applause, and a standing ovation. The producers of Fursona announced that for the actual on-stage production of the play (scheduled for next year) they are looking to have some actual high-quality fur-suits constructed… and that costs money. So, they have started up an Indiegogo campaign to raise funds. Check it out here to find out more about what they need. And keep your eyes on InFurNation to find out when the play will premier! Crossaffliction is working on a sort into categories of all Flayrah’s posts. He has started at the beginning in January 2001, and is so far through September 2004. He notes that as of that date, there are only seven Furry convention reports. “[T]hey seem to have fallen out of fashion as of late. In case you hadn't noticed.”

He is right. I have complained about the difficulty that this makes in writing a history of Furry fandom. Early s-f fans wrote convention reports of five to ten pages in their fanzines. When Sam Moskowitz wrote his history of s-f fandom in the 1930s, and Harry Warner, Jr. wrote his of s-f fandom in the 1940s, and I wrote a history of the World S-F Convention from 1939 through 1948 in 1976, we had no trouble getting information on the conventions because of the long, detailed con reports in the fanzines. But there has been little of this in Furry fandom. A Furry con report tends to be little more than, “I went to the con and I had a good time”, or, “A lot of people caught the con crud”, or posting a half dozen or so photos of unidentified Fursuiters.

To do something about this, here is my very incomplete report of CaliFur VIII just past. I hope that other attendees can add to it.

The 2012 Ursa Major Awards, for the best in anthropomorphic literature and art of 2011, will be presented in a ceremony at Califur 8, at the Irvine Marriott Hotel in Irvine, California on 1–3 June 2012. 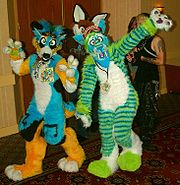 Syber and Skittles prowl the halls (photo by Orzel; more)

Visitors to this month's Califur had low expectations after last year's disappointing experience.[1] Instead, hotel and convention staff delivered what attendees dubbed "the best Califur by a wide margin", "light years better than the last time" and "the best year yet".[1][2][3]

The registration count rose 23% to 720,[4] with several dealers reporting a decent profit.[5][6][5][7] The event made much of its safari theme, printing the now-common personalized room keys. Several fursuiters played along, accessorizing their costumes with plastic guns and crossbows; at least 87 participated in the fursuit parade.[8]

Some commented adversely on the presence of Cal Cotton, a dealer in real fur tails, mink-tipped floggers and scrimshaws.[9][10] It was not their first year, though, and despite recent activism against the use of real fur in plush toys, many attendees saw no real problem.[9][2]

Califur 4's venue was memorable for all the wrong reasons — a disappointing ice-cream social,[11] filming (albeit by furries) in the halls,[12] and a wedding reception forcing the event into what one con-goer described as a "furry ghetto" of black curtains.[13][14] The curtains were so notorious that their lack was advertised as a feature of the new hotel, the Irvine Mariott.[15]

A new hotel and the steampunk theme were the most noticeable things about Califur this year. Held May 15-18 at the Hyatt Regency in Irvine, California, the fifth Califur convention attracted 587 registered attendees.[1]

After con staff felt that they had outgrown the Holiday Inn, they arranged for Califur 4 to be held at the Hyatt Regency. Califur 4 did not come close to filling the event space in the hotel, as there was a wedding, a senior prom, and other events the same weekend.[2][3][4]

Hotel staff put up a black curtain to separate Califur areas from space being used by the other events, which annoyed some Califur attendees.[2][5][6] There were reports that non-Califur people, some possibly drunk, were disregarding the curtain and bothering Califur attendees.[7][8]

Some attendees felt that the convention was unwelcome at the hotel,[6][5][9] but most still admit that individual hotel staff were friendly or at least professionally polite.[10][2]

Comic-Con International has stopped selling passes for most days amid record attendance. Only a limited number of Sunday passes remain.[1]

However, Califur Diego will still be open to San Diego area furries on Friday and Saturday at 8pm at the Horton Grand Hotel in the Gaslamp District.[2] The Horton Grand is located at 311 Island Avenue in San Diego, California 92101. Donations are welcomed by the organizers.[3]