The results of the eighth once in a decade Sight and Sound "Greatest Films of All Time" poll were released last year, which kind of puts my list in its place. The number one movie there was Jeanne Dielman, 23, quai du Commerce, 1080 Bruxelles; haven't seen that one yet. Catchy title, though! Hey, my top pick for 2017 did make top 100 (in a five way tie for last)! Well, let's see how influential my picks for this year are in 10 years for the next poll.

So, this is a year end top ten list of my picks for favorite movies of the year. Pretty simple premise, and I've written what counts and what doesn't before, and this is the internet, so I can just link to older lists if you want the nitty gritty details. I don't need to rehash them. Though Flayrah is a furry site, this is not a furry list. However, I will pick out my favorite furry movie of the year, which was Turning Red this year, as well as a Cutest Vixen Award, just for fun. This year's prestigious CVA goes to Diane Foxington, a.k.a. the Crimson Paw, in The Bad Guys. It was an overall pretty good year for movies, so much that I actually feel like giving away a few honorable mentions, listed here in no particular order other than alphabetical; Beast, Black Panther: Wakanda Forever, Everything Everywhere All at Once, Three Thousand Years of Longing and The Woman King. Also, shoutout to Prey, which was streaming exclusive, and which I didn't consider for the list, but was worth a shoutout anyway.

Well, let's get to the list proper. The film's title and posters link to IMDB or a Flayrah review for more information than the short blurb here could give you. Enjoy! 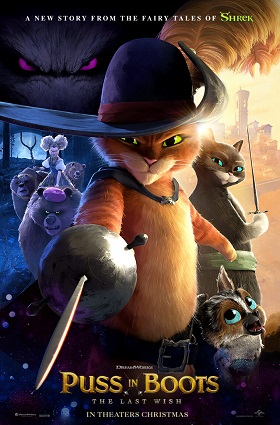 Let's start at the beginning.

Before Puss in Boots: The Last Wish, even. How about DreamWorks Animation's new studio bumper? It's a bit ostentatious, even a bit overly pleased with itself. Maybe goes on a little long. But, then again, what studio bumper doesn't, nowadays? But, being a celebration of DreamWorks past triumphs, it's interesting to note what franchises were chosen to be spotlighted.

Right out the gate, the Bad Guys are getting quite a vote of confidence, despite being the new guys with one movie under their belts. So I think it's safe to say we're getting a sequel. Also for furries, the Kung Fu Panda series is featured, and we already know that's got a fourth movie coming. The How To Train Your Dragon series is also represented by Toothless, despite the fact that the last movie came to a very decisive story end. It's one of the more acclaimed franchises of DreamWorks, so it has to show up, and even if there are no more movies, smaller screen spinoffs are still happening. There are also appearances by the Trolls and Boss Baby franchises, but they aren't furry, so who cares?

There are some notable absences, however. Despite featuring four movies, the Madagascar franchise is ignored. Spirit, you know, the one with the horse? That somehow managed two movies, but is apparently not an ongoing concern. And obviously, the Shrek franchise is prominently featured, but the star of the movie we're about to actually start reviewing is not. Maybe he'll show up in the bumper for movies he's not the star of? 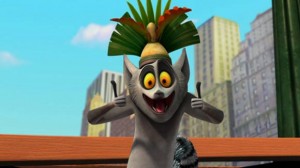 Last year, DreamWorks Animation put out three movies: the prestige picture, the fun picture, and the Shrek sequel. On one hand, MegaMind did not have the emotional resonance of How To Train Your Dragon. On the other hand, HTTYD did not feature Will Ferrell emerging from his own head screaming “Presentation!” while Guns’N’Roses “Welcome to the Jungle” blared on the soundtrack.

I’m sensing the beginning of a pattern this year. Kung Fu Panda 2 seemed to be the prestige picture for the year. Puss in Boots is the fun picture, with the Shrek sequel squished into it.