Currently the Non-Fiction category only has one entry in it - so I've gone and suggested Lisa Ling's CNN episode (amongst many other things). If there's a podcast or YouTube channel that created an informative episode that really stood out on its own, this is where you can add that.

The Short Fiction category looks pretty full, but over half are recommendations to read a specific author. (Seriously, if you're a fan, how about narrowing it down to an author's top two? It's not as overboard as the 2011 short story list, but still.)

The Dramatic Short Work or Series category is similarly bloated - there are over 50 things in it already, and while this has always been one of the more popular sections, this year it's because someone systematically linked to dozens of Nickolodeon Animated Shorts. (I know the List likes to organize itself alphabetically, but I don't suppose all the Nick Shorts could be grouped together, for the sake of easily being able to tell what isn't a Nick Short?)

The Magazine category only has Flayrah and Dogpatch Press in it, and in the past has also included podcasts and things, so that could be expanded. The Website category is similarly short - Have a favorite furry website? A favorite blog? A YouTube channel that posts informational stuff? It can go here!

The Fursuit category is relatively new, and so far the only thing in it is Zabivaka, Russia's World Cup soccer mascot. You don't have to be a mascot to get on the list, but this category requires a bit more information if you want to add to it. Your first question might be, "Wait, is this for fursuit makers or owners?", and the answer is Yes. Here's what you need to send in:

However! If you have a fursuit performance video - like a comedy sketch, dance, or music video, that qualifies to go into the Dramatic Short Work or Series category.

Please add to the list! Furry fandom is very scattered across the Internet - it's difficult to track down new things that you might never have heard about. Use this list to help out your fellow fans, and we'll see what new surprises 2019 has in store for us!

Thank you for helping to spread the word, Dronon. But you might want to mention that the Recommended List is part of the Ursa Major Awards ^^ We've been around almost 20 years now, y'know! www.ursamajorawards.org

I was the one who was recommending the Nick shorts, but stopped before December. I was just trying to make the category more interesting. Also, you can't group ALL the Nick shorts together, because there are a select few (not recommended) that do not feature an anthropomorphic character.

Oh, I didn't mean to turn them all into one entry, sorry - I meant maybe create an indented list with "Nick Shorts: " at the top, followed by the whole selection, or "(Nick Short)" added to them afterwards in brackets. Of that bunch I enjoyed The Girl From Dinosaur Island.

One good thing to come from the Tumblr exodus is that it's pushed all sorts of websites into relevance as they race to fill the gap caused by the NSFW ban. Newgrounds is relevant again! And they committed to upgrading their art portal in response to the INITIAL mass user ban! In just a month, Best Website turned into the most competitive category.

And see what you can get if you win it! (Folkmanis® puppets, model and Lunicent's snazzy Inkbunny T-shirt not included.) 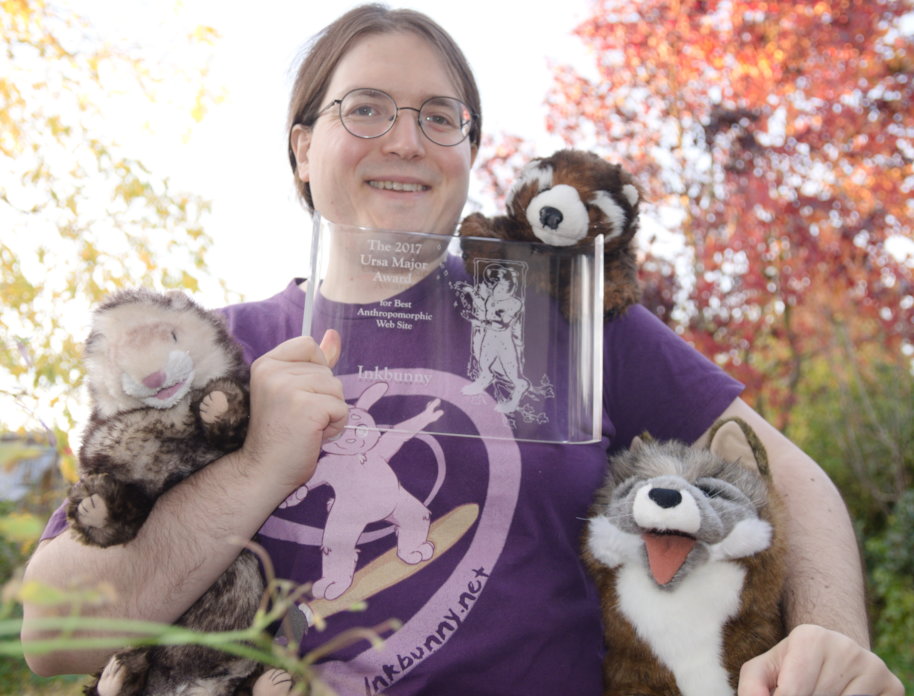 I've got a snazzy Inkbunny sweatshirt. You didn't see it when we met because it was in the summer. It's not as nice and soft as it used to be though...