Animation: 'Turbo' is speeding toward us at a snail's pace

DreamWorks has released its first teaser trailer for Turbo, an animated feature about a snail obsessed with speed. It is all over the Internet; ComingSoon.net has the teaser and a plot synopsis. Ryan Reynolds voices Turbo the snail; Samuel L. Jackson is Whiplash, another snail. The feature arrives on July 19, 2013; a TV animated series is to follow.

DreamWorks Animation may be able to anthropomorphize a snail, but even they can’t make him (shouldn’t it be “it”? [or “hir”?]) cute. At least they got the eyes on the stalks right, instead of putting them under the “feelers”.

Samuel L. Jackson is the voice of Whiplash the snail. Let’s see; Samuel L. Jackson has been the voice of Tendai, a falcon in Zambezia; Rumbo, a dog in Fluke … hmmm; I guess that all of his other voice work has been as humans, such as Frozone in The Incredibles. Well, I’m sure that more anthropomorphs loom in his future. 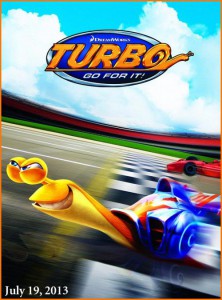