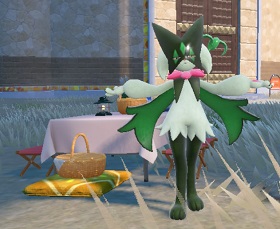 In the core Pokémon video game series, most main entries begin with the player making a choice between three Pokémon, one each Grass, Fire and Water type, which becomes their first Pokémon. These Pokémon, known as "starter", and also their third and final "evolutions", are given unique prominence in the minds of players, mostly for sentimental reasons, as everybody remembers their first, and partially because these Pokémon are slightly stronger than average, especially during early game. They are also rare, as the beginning of the game is usually the only time they are available, outside of trading with other players or breeding duplicates (which the game makes harder for starters by making them predominantly male, when offspring species is determined by the female in a breeding pair).

Due to this prominence, the character designs for the starters and their final evolution are heavily scrutinized. In more recent generations of Pokémon, a common complaint has been a rise in bipedalism and "human like" designs for the characters, a complaint that resurfaced with the evolution of quadripedal Grass Cat Sprigatito into bipedal Meowscarada (bipedal cats seem to especially stir strong reactions, if the earlier reaction to Incineroar is any indication). Now, partially, this is all aesthetic preferences, and it all comes down to personal choice, but there does seem to be a strong "no furries" aspect to the complaining from some quadrants. Furries definitely seem to prefer the bipedal look, with Meowscarada showing up over 550 times on e621, while Quaqaval the duck is a distant second with just over 60, which is still double third place Skeledirge the quadrupedal crocodile with not even 30 pieces as of this writing. And there is reason to doubt this is a "recent" trend among Pokémon starters, as well.

About 2 years ago, I started to see a growing debate about 'feral' NSFW art, and it was mostly more calm. The first time was when FurryLife.online started to ban most feral furry pornography, which has sparked a lot of debate online here (in the comment section), Twitter, and some other online sites. In the discussions, there were a lot of folks defending it with a fair amount of logic, mainly explaining that human levels of intelligence creates a difference. There were also folks reasoning that many of such ferals being attractive were exactly the same reasoning why furry characters such as Nick Wilde would be considered attractive by many other furries, by the fact that they have animal parts.

After such drama emerged, it felt as if it was dying down, thankfully. However recently on about June 19th, a popular furry known as KaimTime has been publicly “exposed” after some furries found out that they had a “feral” focused NSFW Twitter account known as Feral Fawcet. As a result, angry furries accused the person of being into “zoophilia”. as well as many Twitter folks ending up doing the whole “if you support this, block me” style posts. There was even one popular YouTuber, Crying Blossom, who made a call-out video against KaimTime mainly for KaimTime having the separate Twitter feed with this art on it, and their response video defending their right to have this separate page and fantasy. All of this, likely because of a furry artist partly having an interest in having fantasies with anthropomorphic animals on all fours.

Voting is open for the 2021 Ursa Major Awards

The vote for the 2021 Ursa Major Awards is happening this month! Send them your e-mail address, and you can vote for any of the nominations in 14 categories. Voting closes on Thursday, March 31.

Links to the content in question are provided, some may be for mature audiences. Ursa's Twitter Feed also provides a summary of each of the nominees for the categories.

Spread the word - Please re-post this announcement if you're on an active furry message forum or social media site!

Winners of the 2020 Ursa Major Awards

The winners of the 2020 Ursa Major Awards have been announced on YouTube!

Nominations for the best work involving anthropomorphic animals in 2020 were taken this February, and the top five in each of fourteen categories were voted on during March.

This year's winners are…