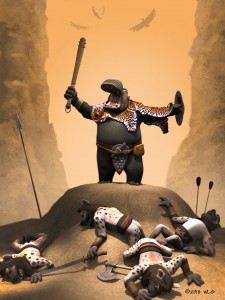 Created by the Fred & Farid agency, the commercials are for "Miss O", the sugar-free version of Orangina. With the tagline "Who’s Boss?", the advertisements take stereotypical gender roles in relationships, and reverse them.

In one promo, a hyena businesswoman phones home to her human boyfriend or husband, and proceeds to lie about working late so she can have a night out with her friends. In the other, a black wolf in a cafe gives a "It’s not you - it’s me" speech to her human boyfriend, who doesn't take the breakup very well.

Well now, this seems to have come out of nowhere: Carnal, Volume 1: Pride of the Lions, written by Jason Bergenstock and illustrated by John Connell.  Here’s the description from an article by Mother/Writer/Gamer: “The first graphic novel in the Carnal series, Pride of the Lions takes place on the continent of New Africa and focuses on three main species of humanistic animals. After the Great War decades earlier between the hyenas and the lions, the victorious and once united lion prides now lay scattered across the land, torn by civil unrest over territory disputes and food shortages. The hyena clans that survived the war were forced deep into the Earth and now live in a massive underground city under the control of a terrible witch. The buffalo race is indifferent to most other species and have walled themselves off from the rest of the kingdoms. Humans have lost their hold on the African territories long ago and live as a simple, nomadic species. The first book opens with Long Eyes, an old sapphire-eyed lion who is determined to save the lion kingdom and rescue his warrior son, Oron, who has gone missing. Long Eyes believes Oron is the key to uniting the prides. Hyena giggles may convey important information about the age and status of individuals, as this BBC article explains.

Their research (click names) on the social behavior of the Spotted Hyena is worth reading.

Residents in rural areas of Malawi are terrified as hyaena attacks have been attributed in the deaths of half a dozen people since Christmas. This almost unheard of situation has been attributed to overcrowding of habitat, lack of food, even witchcraft. The government doesn't know what's driving the animals to kill and eat people, but plans to send rangers to hunt them down.